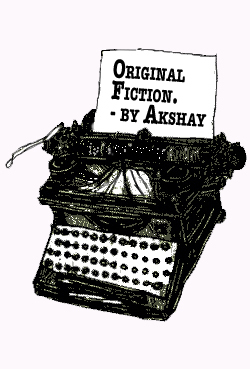 Hey folks! I’m back with some more original fiction and this time it’s quite a departure from my usual stuff. This was an idea that came to mind a couple of days ago and I decided to flesh it out a little and then I saw the prompts from InMon this week and it sparked something in the slowly brewing story and now here it is – in fact I was so motivated I’ve even done a sketch for it showing the base setting of the story.

I do hope you enjoy reading through it, though it is a little on the somber side.

She stared at the tiny pills in her hand with a confusing blend of desperation and uncertainty. It would be so easy to just empty that little plastic bottle of its contents, chase it down with a bottle of fine wine and maybe finally she could be at peace. Enough with the craziness that was life, the horror that was the world around and enough with her failures at everything.

But then the uncertainty would rear it’s annoying head and she’d wonder if there was an afterlife, if she would finally be free or would she become a spectre forever floating amongst the living. What if someone saved her? That would be just like the caprices of fate to push her to the edge and then refuse to let her go – like a terrible cliché expecting her to then suddenly discover joy in life again or some such bull-shit.

“Are you alright miss?” came a tiny little voice in her ear, “Would you like to feed them too?”

Shaken out of her who-knows-how-many-minutes-long glazing, she blinked away the fog and darting her eyes, noticed the little boy sitting on the other end of the bench from her.

“Miss?” he ventured again, that hint of genuine, innocent concern impossible to ignore in his voice and expression.

He looked so very young and she found herself unwilling to burden an innocent and to take away what joy he had still. So she forced the most genuine looking smile she could manage with as much warmth as she could muster and replied, “Thank you, I’m alright. I was just… thinking about something.”

A couple of minutes passed as they sat, her sitting unmoving and just barely focussed on reality and him swinging his short little legs as they both silently sat and watched a bunch of pigeons puttering about nearby.

“Would you like to feed them too?” he said, offering up a tiny plastic bag half-full of seeds held in his tiny little hand. This time the concern on his face was replaced by a gentle, congenial smile.

This time she couldn’t help but feel a genuine little smile pull at the corners of her mouth.

“Thank you young man, I’d like that very much.” she said, taking a small mound seeds into her cupped palm, the bag now a third lighter than before.

For several minutes they sat in contemplative silence, periodically tossing a pinch or so of seeds at the oblivious but grateful birds that had chosen to accept their presence and close proximity in exchange for the privilege of feeding them. 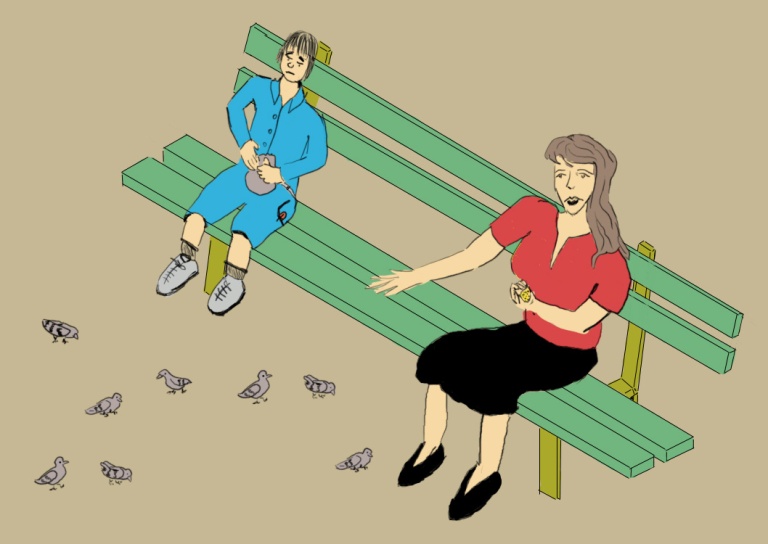 “I didn’t mean to disturb you.” he finally said, “You just looked like you were really sad and I thought maybe feeding the pigeons would make you feel better. It helps me sometimes.”

“No, no, it’s perfectly alright.” she replied, both of them still watching the birds and feeding, their conversation carrying on seemingly absently.

After a pause, “You were right, I was a little sad. And this is nice, feeding the birds. Almost took my mind of… other things. I used to love the image of the old men in movies doing this.”

“I’ve never watched many movies.” he said, adding softly, “It’s just… something my Mom used to do with me.”

That jerked her a little back out to him and she saw a hint of sadness in his profile and felt a tug inside.

“She’s gone.” he replied before she could decide where to take that question. “One year back. She was really, really sad for a while and then…” a tremor passed across his face, “and then she decided to go away.”

“Oh you poor boy, I’m very sorry.” she said after a beat, that tug now an ache for this child having to face such a thing. Then she hesitated a moment before asking, “And where’s your Dad?”

“My Papa? He’s at work.” he replied, turning back to the birds. “He works a lot so he can take care of us both. I only see him a little everyday, but he looks after me his best.” He turned to look at her and with no motive, no intent beyond just wanting to know on his face he asked her, “Why were you so sad miss? You looked sad like something really bad happened.”

For a moment she was dumbfounded. On the one hand she had no reason to nor desire to burden this child with her problems and on the other, he had bared himself to her and she felt compelled by his earnestness to rspond.

“I…” she started and then again, “A long time ago I was very happy and had everything I’d ever thought I wanted – Career, lifestyle, husband, passion. But over time it slowly started slipping away from me. No real love at home and even at work, sometimes there’s nothing left to conquer.” And before she realised it, she was freely relating her past without any prompting, “Sometimes I think it was my fault, sometimes I blame God or the people in my life. But none of that matters much because it all fell apart and by the time it did it was too late for me to do anything about it. My husband left me for someone else and because of that I got more and more distressed, hurting my relationships with others and even my work – which of course eventually led to me losing that one last thing I had cared about or wanted.”

As she finished, the boy asked in the same empathetic and congenial tone as before, “That’s too bad. Did you and your husband have any children?”

Suddenly in that moment it hit her how candidly she had been talking and had done exactly what she hadn’t wanted to do to him.

“It’s alright.” he shrugged, “People talk a lot when someone will listen. But they don’t listen to kids like me much.”

She was silent, unable to think of a response to this insight by this small child who had clearly been through a tough life.

“Do you stop here and feed the birds often on your way home from school?” she asked, gesturing at the back of books near his dangling feet, hoping to move the conversation somewhere else.

Several beats went by as she felt a touch awkward and he kept watching his pigeons, his attention somewhere within the bewildering mind of a small child.

Finally he broke the silence, “Papa says things were too much for her and even though she was really nice and took care of us both, she couldn’t stay. He told me that she loves us still but some people get called up to a heaven by God when they’re very young and that she was with God now and not sad anymore.

“I don’t really believe that. I’m just a kid but all the stuff people keep telling me about God and the stories and stuff, it can’t be true because if God really loved us all he wouldn’t do things like he does and let bad stuff happen to people like my Mom. Even you seem really nice, “he said turning to face her again, “and all that sad stuff wasn’t fair.”

Once again she was confounded by the boys’ candour and was scrambling for a response even as he continued, “I don’t know, maybe God looks at us like we look at ants, he can see us but he has more important things to take care of.”

With that he seemed to finish what was on his mind and turned back to the pigeons, still slowly flitting, flapping and playfully bobbing around as the searched for the bounty being tossed around them.

“I was going to say something right now about how that’s wrong and God is everywhere and it’s all part of his plan. But I don’t really believe that myself.” she finally said, shaking her head, “But I feel like I should be honest with you. Like you, I’m not sure if there is a God, not sure if we are loved or we are those little ants. What I do know is that it doesn’t really matter.

I went through most of my life not really caring about these things or praying or anything. I might as well have not believed, but in that time it made no difference and when it finally went bad after many years, it wouldn’t be fair to blame some mystery father in the sky. It’s easier to blame God I suppose. But it’s not fair.”

She stopped as a tear welled up and she had to preemptively wipe it away before going on, “If there is a God, maybe he’s already given us everything in this world. Like these pigeons or this park. It’s all really beautiful isn’t it? And it’s free and for everyone – what we do with it is our choice.”

The boy had been quietly listening this whole time, a very earnest and serious expression on his face, and after a several moment of consideration he finally spoke, “Thank you.”

“For talking to me like a person and not a kid.” he replied, the hint of a soft smile across his whole face as he looked at her and in that moment she also felt an unexpected lightness.

“And you’re right,” he went on, “Maybe God is there, but just like you said, I don’t know and maybe the world we have and the people we have is enough if we want it to be enough. It’s like toaster waffles!”

Before she could bring voice to the quizzical look that last statement brought to her face, he continued, “I mean, my Dad’s like God, he brings them and keeps them there and I can eat them if I want to or not and if they’re old, I just leave those and can open a new box so I have to never eat soggy waffles.”

With that he hopped off the bench, dusted himself off and grabbed his bag of books, carefully tucking the much-smaller-now bag of seeds into a pocket.

“Where are you going now?”

With a warm smile he looked at her and said, “I’m going to go home, clean up my room and do my homework and when my Dad comes home I’m going to tell him I love him.”

With that he took a couple of steps back and slowly turned toward the garden path with a wave and a goodbye and moments later he was on his way and away from hers.

She turned away one he was out of clear sight and once again looked at the pigeons. The seeds in her hand were gone by now and she stayed silent several minutes, not thinking on anything in particular, as though her mind needed to run things independent of her conscious mind in that moment. After some time passed she decided to leave and as she stood up and put her hands in her pockets, she found something. It was the bottle of pills.

She looked long and hard at those pills and then up at the sky as dusk settled slowly beyond the trees. Heaving a deep sigh she pocketed the pills, thinking, that maybe she would be at this cross-roads again soon and end it all.