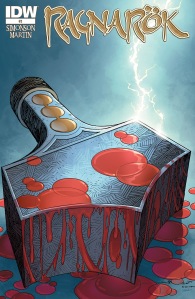 I picked up this comic out of love for Walt Simonson who is one of the best in the field and arguably the writer of the best run on Marvel’s Thor comic ever. I now choose to stay because while this comic also concerns Norse mythology and Thor, it is now clearly a whole other animal.

And what an animal it is: We have a band of dark elves who have now accidentally awoken what looked like a chained up corpse on a throne, only to find (to their dismay of course!) that it is none other than the once great Thor himself, lord of thunder! Except that in this present time – set far, far into the future – Thor appears to be a somewhat damaged, almost mummified version of himself (minus the bandages). But then he begins to unleash the wrath for which he is known and summons for the lightning and his mighty Uru hammer and it is so on!

For fans of Walt’s other version of the Norse God, this is NOT that comic. This is not a version of Thor you are used to and despite a “future/old” Thor in the recently concluded Marvel ongoing, this one is more akin to the harsh, brutal and more simply blunt version of the Norse-men that one would expect from a Viking diety and less of the gleaming and pure-hearted hero that we have gotten used to in his more popular avatar.

As always, Walt tells a decent enough story and being both writer and artist, he is able to have a nice flow to pretty much everything on every single page and give us a nice and action-packed reading experience with an ending that really starts to rev the engine as you start to picture all the things to come!

Recommended for fantasy fans and especially for those seeking something nice and action heavy but not over-loaded or needlessly gory. This is a good, old-school action comic with a solid fantasy twist. Read it.