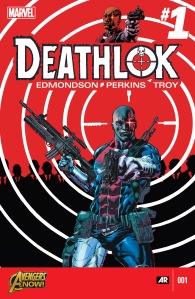 I suppose it was inevitable that after the positive reaction to the recent portrayal on TV’s Marvels Agents of S.H.I.E.L.D by actor J. August Richards as the cyborg assassin Deathlok, that a comic version would be relaunched.

That coupled with Nathan Edmonson on writing duties, made this a mixed bag of expectations.

The final result is odd because it’s both encouraging yet oddly not entirely satisfactory.

Our basic story concerns a new character who is an African-American former soldier with a cybernetic leg. He is an Aid-worker who unknown to himself even, is a super killing machine whose memory gets wiped out after every mission, during which he is under some kind of auto-pilot action-mode.

Wait, does that sound… familiar? It should, because in a slightly broad sense, this to me felt like a bit of a rehash of the relaunched Bloodshot series from Valiant Comics which had a stronger starting issue.

But, not everything can be 100% original and though it does share that in common, it goes from there to bringing in a cameo from Maria Hill from SHIELD assigning an agent to track down answers to a bloody mystery, which for reasons as yet unexplained, has led her to provide a file that includes a picture of the old Deathlok.

Which brings me to the visuals because that is a big part of a relaunch, especially when a costume is redesigned in the comic world. Deathlok is a bit of a cult favourite and so changes will be scrutinised – not by me mind you, by some folks. That said, the costume seems mostly fine and is similar enough to the old version while being a bit unique. BUT, that helmet, man that helmet looks really a bit silly! I can’t quite put my finger on it, but it definitely needs… something.

In addition, I can’t say I’m too crazy about the artwork as a whole either. It’s not bad by itself, but it feels pretty mundane and except for a few details here and there which are a nice touch, largely was just “nice”. The colours by Andy Troy were actually far, far more pleasing in my view.

This could be a good series, Edmonson knows how to write one for sure and this kind of spy-esque funky adventure is right up his alley but it’s not off to an auspicious start and that finale with Black Tarantula… It’s fine, but I’m not impressed.