So… DC Comics has been taking a beating from folks like me lately. For their comics, for the movies…

for pretty much everything except the Arrow and The Flash which are actually good fun and have me more excited now because the ballsy guys over at Arrow are trying to resurrect the criminally under-appreciated Constantine into their fold. The much lauded Gotham however, man I really dislike that show, except the excellent turn by Taylor as the to-be-Penguin and the impeccably casted, perfect-for-the-part Donal Logue as the grizzled Harvey Bullock.

But while their live-action forays have met with highly varied and mixed success across the board, it’s their comics that are to my mind the most divisive right now. They have hardcore fans who are utterly into and loving what’s coming out every month – and on the other side you have saddened fans like me who have actually either given up reading their comics almost entirely or are getting there. 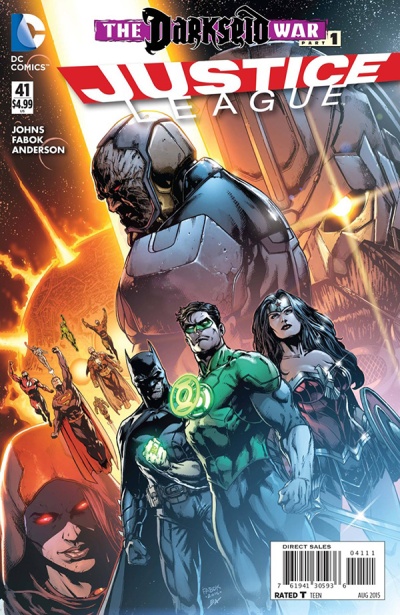 Truth is I was a little heartbroken at reaching a point where I’ve chosen to stop reading Batman, Superman, Wonder Woman and all the other iconic characters to whom DC is home.

But that’s passed. Like all things in the comic world, this too shall pass. Like the wierdly macho-esque, hyper-violent cool of the 90’s and the sillier tales of the years before that and other phases, this is a phase and not permanent and somewhere down the line I’ll find a new writer coming on board who will be allowed to create stories that appeal to the likes of me.

IN THE MEANTIME HOWEVER… I have elected to continue to have fun with DC and today that means sharing the hilarity that is the new Justice League.

In the wake of the event-y thing that just got over, the JL is back on Earth and strangely they are caught in the middle of the “Darkseid War” where (for some reason) ol’ grumpy Omega-eyes is duking it out with (of all beings), the anti-monitor.

For those of you that have been following this series, you know that there’s the Darkseids daughter character plus lots of crazy new developments that have been happening that will be revealed in these pages as this story seems to pre-date all the current rebooted/new comic stories like Superman getting all grizzled and depowered, Jim Gordon becoming a mohawked, mecha-suited Batman (who is somehow… younger than I would have expected him to be – yay reboots!) and maybe whatever else is going on in the DCU since I don’t actively read any of the comics.

The best part about being a non-reader these days is that there’s no shortage of news bulletins and such on what’s going on, especially since there’s so much changing. For our purposes today, we stick to JL #41 and #42 (the latter just released) and some fun in it. 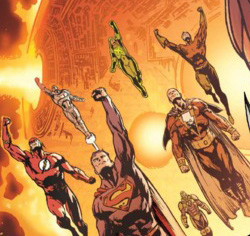 Is it just me or is hilarious that for whatever reason (probably because it’s “cool” which seems to be the DC decision making process the last few years..) The Flash and Aquaman are flying here alongside Supes and Shazam and the rest?

Next up is this Green Lantern-Care Bear bullshit. Whose idea was this and why? I keep seeing it pop up lately and it’s been used a lot it seems but serves no purpose I can think of – and unlike many other things they do, this doesn’t even LOOK COOL! …in fact to me it looks like GL and WW are staring off into the middle-distance dramatically but Bats is staring at the stupid glow-y chest-y thing and in his mind thinking, “Jordon, you are such an absolute dumbass.”

…Does anyone else think that ol’ Darkseids lil’ girl here looks like she got herself some stubble going? Maybe daddy-o can gift her a razor when they’re re-united again. Or just Omega-Beam that shit right off, save time.

Who thought it would be a good design choice to give the Anti-Monitors costume a feature that looks like he’s put chopsticks in his nose and pretending to be a grumpy walrus? No seriously, I’m curious.

This is how the issue ends, with Batman hopping onto the Moebius chair left vacant by it’s long-time sitter Metron (who was parted from his all-knowing, floaty, TARDIS-y, magic La-Z-Boy. Could happen to anyone!) so that no one else can get their hands on it – giving us BAT-GOD! I’d actually be curiouser and curiouser to see what that religion would be like if I’m honest.

Bat-God and his agent on Earth, Pope Robin. Or would the Pope’s of Batsianity (Batslam? Batuism?Batmanianism…?) be referred to as Robins? Or Alfreds?

Do you hear me DC?! This is a comic I would read right now if you put it out!

And finally we get to the aftermath which has all of… or at least some corners of the internet buzzing. What does Batman do once he’s God?

Well obviously he double-checks who killed his folks and we’re back to Joe Chill. Cool.

Then he does an interesting one and asks for The Jokers real identity. Alright. I can see the potential in that choice, but honestly, it’s one of those things that sadly I think would be a terrible thing in the long run.

Why you ask? Because the truth is that no matter what identity you give him, a character like The Joker can and will only be diminished from what he is if you make him any less enigmatic and anchored in any way whatsover.

What’s really scary about the way this is done? Batsus Christs reaction. Makes me think that they’re going to make it someone shocking who Buddha-Bat has some vague connection to, so that thereafter it’s Bruce’s destiny to be locked in a continuous struggle with him and… (*insert sounds of overwhelming nausea taking over here as I go retch my creative guts out at the shitty-ness of what that would do the Batman mythos…*)

NEXT! Well moving onto more silliness, here’s two queries I saw/got on this page in particular from other fans:

When he gave him the answer, did the chair also magically insta-shave his stubble? Or was it like a cartoon where the shock of the truth scared the hair right off his face?

Personally I would die of laughter and actually tip my hat to the guys behind this story if they revealed that his real name was Mr. Joe Kerr. Seriously, I would bust a gut!

Thanks DC, for unintentionally giving me some late-week laughs this week and hopefully you’ll continue to throw out amusing and chuckle-worthy stuff, if not terribly readable stuff for now at least.