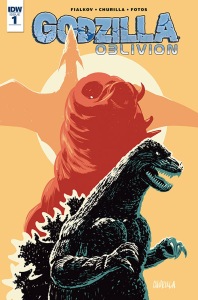 A new Godzilla-based comic is out. I remained skeptical even as I got it to read – I had read many attempts at cashing in on the big-fellows cult status but been burnt far more often than not, with perhaps a recent Godzilla In Hell series being a rare exception.

So now we have a new series, one that includes extra-dimensional travel. Will it be good?

And can it be bad with a creative pairing like Joshua Fialkov (I,Vampire / The Life After) and the amazing Brian Churilla (Big Trouble in Little China / Hellbreak) at the helm? It was this last question in particular that made me give it a shot more than anything else.

The basic setup, that of a richy-rich type (fun to have it be a billionaire-ess instead of a dude this time) who funds a group of scientists to build a gateway that allows travels between their world and possible others. They succeed and in a hilariously rushed and smug, self-absorbed manner, our rich leading lady bull-dozes and manipulates the scientists into starting it up despite reservations – the doing of this without threatening their lives was nice for a change.

Well they make the trip to end up in a hell-hole that is ravaged by monsters and is possibly what the world would look like if monsters were in fact real, even if we had one solitary Godzilla to fight against them. Some of the setup there made little sense, i.e., if there are so many monsters in that world, sure Godzilla is badass and could keep them in check and such, but if they’re all over and in large numbers, I imagine at least some of them would be smart enough to lay low and get stronger and then gang up and take the big-G down… but never mind, just me being me, spoiling an otherwise cool concept!

While this first issue was moderate on story-building, it wasn’t lacking and in fact was a nice balance of putting enough information out and holding back to keep it interesting and draw you back into the later issues.

Where it suffered for me a tad sadly, was the art. It was uneven to say the least. Like his other comics, when he was on, Churilla killed it – especially when drawing monsters, they had the most finished look to them. The first few pages too were fine, but there was this chunk in between where it felt like either he was rushed in finishing them or he was trying to make them look rushed to show the fast pace of things happening, whatever it was, those pages looked weak compared to the rest and what the man is capable of putting on the page. The colouring however was simple but bland – I can’t say by design or not, but it was almost too simplistic and flat and in the end didn’t bring anything to a comic that could just as well have been uncoloured or coloured by just about anyone else.

Anyway, the bottom line is that it was a fun enough read, very brisk and light despite the action-heavy goings on and at the end (which fans of the franchise should LOVE) I was actually feeling good about it and realised I wouldn’t mind reading the next issue.