I’ve been enjoying a lot of the really good and entertaining television out there in the past year or so, as my prior posts about TV shows might attest.

But apart from the big, well known names and shows that have either been acclaimed like mad, highly awarded or practically become a part of popular culture, there are ALSO a lot of shows out there that have been fantastic. Essentially in this writers opinion, these are the shows that are undeniably deserving of more recognition and receiving more love from critics and audiences alike.

I remain thankful that all of them are still airing and not cancelled, but with lesser known shows one never knows and I hope that every little bit can help – and so I share my views on them with you and maybe you might be curious, and maybe you might find something you like: 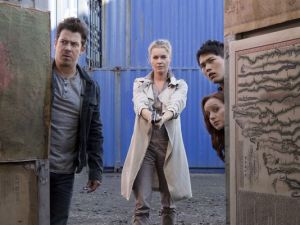 Hands down my pick for the single most under-rated show in recent years and for one of the most under-appreciated franchises! Did you know that there were three movies starring Noah Wylie as The Librarian before this show was made? No?

Did you also know that the series was about a heroic (in a more brainy than brawny way) figure through history called The Librarian who saves the world using his brains and with the invaluable help of his Guardian (each Librarian has one) who is usually a hot kick-ass woman? In the TV series it is Colonel Eve Baird and is portrayed by Rebecca Romjin. 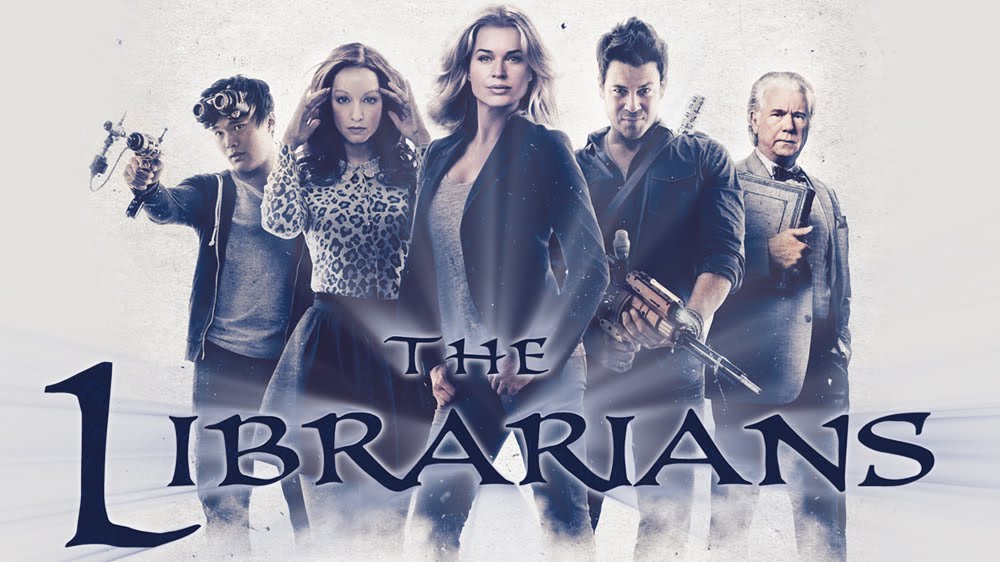 This new series adds on more Librarians because one person alone can’t hold back the bad things trying to come through and (mis)use magic – and so we get tales of adventure, heroism, derring-do, plenty of action and so on! BUT unlike most franchises of this ilk, this one favours ideas, creativity, problem- 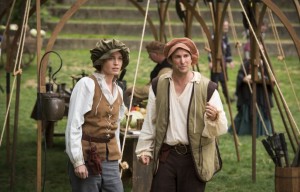 solving, clever little lessons in history and the sciences thrown into the exposition that explains things.

Personally if I had kids of my own, THIS is the thing I would be showing them, not the retard building kiddie-shows you often see. Screw Barney and the Teletubbies and their ilk, THIS is quality story-telling that can be enjoyed by everyone from the young ones in your home to you and even your grand-parents – because it’s good, clean fun done extremely well and never dumbed down as if the audience lacks enough brains. 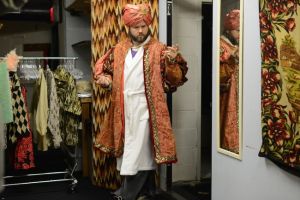 Tyler Labine is a real gem in this show that I never even knew about and literally chanced upon!

I remembered him from the long-cancelled Reaper and the odd supporting role, but THIS, this is the show he was meant to star in and I wish more people would watch it because no one I know seems to have seen it. I’m still playing catch up with season 2, but it’s been nothing short of excellent so far.

Basically, he plays a goofy, pot-smoking, slacker who just happens to be able to talk to ghosts. Except he’s lazy and doesn’t really care, but he does make some cash here and there by helping people out and sometimes just because he’s a nice guy. On top of this, we have his best friend (who also happens to be his weed dealer), lots of quirky supernatural characters and an antagonist in the form of one “Chamomile White”, psychic to the stars and big celebrity – but also a total fraud. There’s also great (and hilarious!) guest stars like Zachary Levi and Fred Armisen over the seasons. 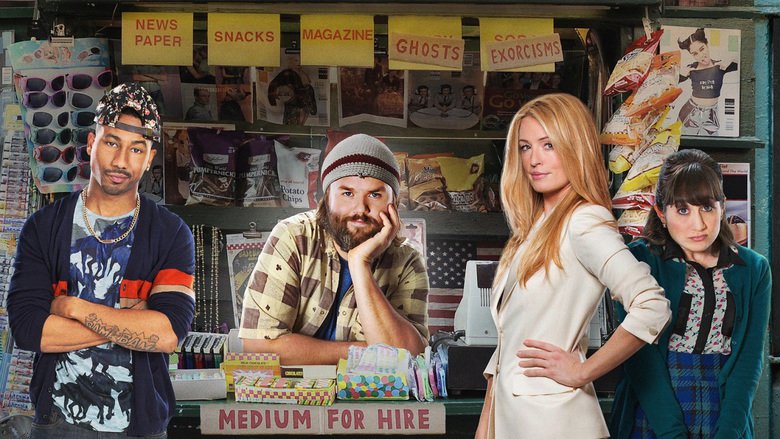 Simply put, it is a well-crafted, pretty original and very entertaining series and a damned good change from the run-of-the-mill and rarely innovative sit-coms and animated shows that too often get the big ratings and buzz.

I would DEFINITELY recommend this to anyone with a sense of humour that likes to explore! 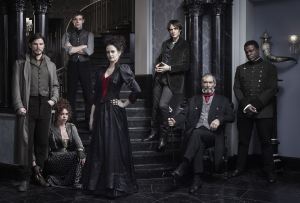 The show pretty much lives up to its namesake – it is in a nutshell a horror-adventure series set in a Victorian England time-frame, though I can’t say exactly when. The British Empire is still going pretty strong and at first you half expect Jeremy Bretts’s Sherlock Holmes to pop along somewhere!

But then we meet our primary characters: Eva Green as the enigmatic Vanessa Ives, Timothy Dalton as her friend/patron (of sorts) Sir Malcolm Murray who is a reknowned and respected Explorer and Josh Hartnett as Ethan Talbot, an American sharpshooter and “man of action” who is recruited for the quest undertaken by the other two.

After a first episode that alternates between near-painstaking slowness filled with conversations and silences and explosive action, the show finds a nice pace and groove as the show moves forward. We find ourselves meeting the most interesting characters, like Victor Frankestein who helps our “heroes” but has secrets and agendas of his own, the beautiful and dangerously alluring young Dorian Gray, Caliban/The Creature who was created by Victor and now is free and making plans of his own – all the while we have the main story calmly and constantly walking through it all as Sir Malcolm, Ms. Ives and Mr. Talbot attempt to decipher clues found within ancient, impossible corpses and hunt down bloodthirsty creatures of the night and try and learn the fate of Sir Malcolm’s daughter.

Dark, atmospheric, moody and filled with a constantly charged feeling even at it’s quietest moments – this is for me an example of what a good horror show can be and I am glad I found it. I’m not a fan of needless gore or shock-horror or gimmickery to get a rise because a story well told can keep you on the edge of your seat, white-knuckled and feeling your heartbeat rise just by itself and this show has achieved that.

If you are looking for a good psychological horror, have a penchant for the older, less modernised fantasy/pulp-fiction/penny-dreadful classics or just want a better quality show than the violent, gross-out shock-fest that passes for horror now, then I say give this a shot.

Yet another quiet gem of a TV show.

When I saw the poster for the show and then read the synopsis, I pretty much wrote it off right away. I expected it to be yet another sit-com with nothing going for it, a mindless comedy with no heart and to some extent, stars Rob Lowe and Fred Savage trying to make something happen in their acting careers.

The show revolves around Rob Lowe’s Dean Sanderson who was a super-successful actor on a TV show called The Grinder wherein he played a super-lawyer who never lost a case, etc, etc – except now the show is over and he’s back home with his family. More specifically his brother Stuarts (Savage) family and wants to get back to “real” law and join the family 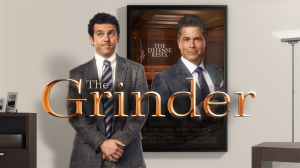 firm with his father and brother. No one thinks he can do wrong, he lives in another world almost (at times it really feels like that!) and never went to/finished law school or gave the bar exam.

Wouldn’t you think the same as I did at first?

But I admit when I’m wrong (as often as I can anyway!) and I have to admit, I was about this show and then some! Not only is the writing actually pretty clever at times and consistently decent over the first season, but it 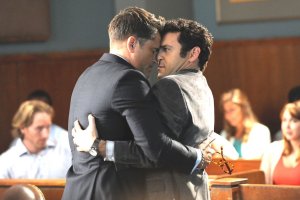 really seems to have a solid handle on the characters – something a lot of shows I find play with in the first season until they find something that works.

The real revelations and joys in this show though, actually turned out to be Lowe and Savage. Lowe has found a dream role and much like his on-screen character, he embraces the role for what it is and runs with it, leading to one of the most odd, confounding and yet strangely, surprisingly charming and endearing characters on TV comedy in a while. That he and Savage have a great chemistry as brothers – and not TV-brothers but what one imagines they are like in real life. 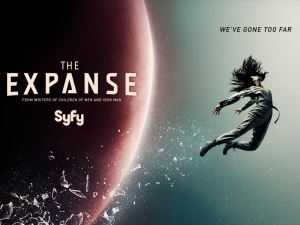 This one’s one of a new breed of large-scale shows and one of a spate of science-fiction shows to find their way to the small screen in recent years.

Based on a series of books by James S. A. Corey, the series is definitely a highly ambitious venture.

The only actors I know from amongst the cast are Shohreh Aghdashloo who plays the U.N. Deputy Undersecretary of Executive Administration and Thomas Jane who plays a somewhat grizzled and jaded police detective named Joe Miller. That said, there are definately a lot of promising performances – like from Dominique Tipper and Steven Strait – and many familiar supporting faces getting some meatier roles here. I have to admit, I like that they didn’t do what many shows do and try and bring on more “bankable” actors to try and ensure ratings but went for a solid cast that play their roles well. 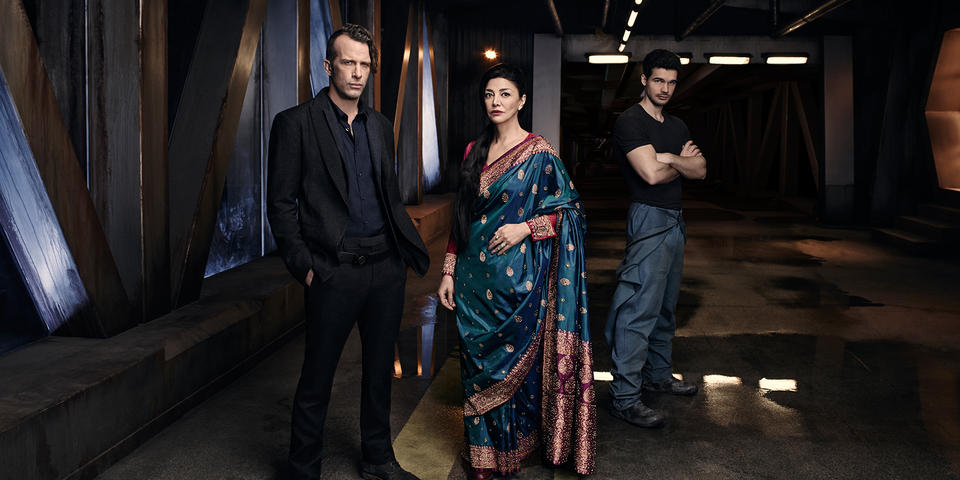 Basically, the show is set some 200 years in the future where ours is now a fully colonized Solar System. Police detective Joe Miller, born in the asteroid belt, is given the assignment to find a missing young woman which he grudgingly accepts. Meanwhile, James Holden, the Executive Officer of an ice trawler, is involved in a tragic incident that threatens to destabilize Earth, Mars and the Belt. Far away from their struggles in space, Chrisjen Avasarala (Aghdashloo), a UN executive, works to prevent war between Earth and Mars by any means necessary. Soon, the three find out that the missing woman and the ice trawler’s fate are part of a vast conspiracy that threatens all humanity.

It is exciting, well paced and boasts surprisingly excellent production quality. Not necessarily for everyone I suppose but if you like a good drama, some mystery and a show that doesn’t just try and keep everything moving at breakneck pacing to keep it exciting and tells a good, solid story instead that draws you in – then you should give this series a shot.

…well that’s all folks! I’m out for today, might be back for a new post before the weeks out if I can. In the meantime, hope I’ve given you some food for thought and that if you take my advice and try and of these shows out, that you enjoy them.