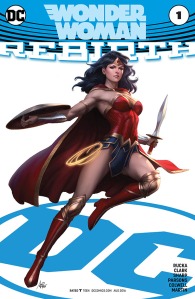 Wonder Woman has always been a difficult property for DC in my experience – they’ve had great runs on her comics by big names and she is without a doubt one of the biggest names in comics, male or female. But recent years, in my opinion ever since the revamp attempt by writer JMS, she has been floundering. There was some great hope with the Brian Azzarello run, one of the best things to come from the New52 reboot, but that fizzled for me almost immediately once the Finch’s took over.

Enter legendary scribe Greg Rucka. He’s a man known for more gritty, street-level stories to most fans, but he is regardless, one of the consistently high-quality writers I have ever known in comics. That skill shows here in a comic that in theory could go very badly in the wrong hands. We have a story about a Wonder Woman who is struggling with a fluctuating history of her life, with uncertainty and doubt. Yet this is meant to be not only a reboot to help bring into the fold readers old and new, it is also meant to be the tale of one of the most powerful and positive female characters in popular fiction. Somehow, Rucka manages to do the near impossible, making Diana startlingly vulnerable and weary, yet at the same time determined and brimming with strength – thus hitting all the things that make her as popular with so many fans. Overall the story doesn’t tell us much which is a wee bit annoying, but seeing the character moments, the emotional weight and the flow of what happens, you can not even notice that because by the end it was clearly all a great jumping on point for what promises to be an adventure of mythic proportions.

Even the art was surprisingly good – mostly because there seems to have been a very mixed team of artists involved in this book which can usually result in inconsistency over pages, too dramatic a change in style and/or tone and such. But somehow thanks in part to a nicely uniform colour palette and its application and possibly some coordination by the artists and editors, the book looks good from beginning to end – though there are some truly standout pages, epecially of our heroine in action.

Definitely a book I will be following and not just because I’m a fan of Rucka’s writing. Both in terms of art and story, if they can maintain this level of quality in both the continuing story and the alternating “Year One” story that will be following on from this issue, well that is very promising indeed. With any luck, we’ll finally have a more definitive origin story for WW and get to enjoy exploring and deconstructing her history which both makes for interesting adventure and caters to both familiar and new readers and allows them to really dig into the character.