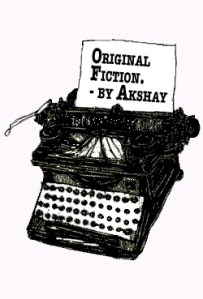 “What a kind insult!” he chuckled, “And here I thought he was looking down on us, but no, he’s got a kindness to him doesn’t he!”

The crowd in the tavern let loose a low cacophony of short laughs and chuckling sounds, all genuine but somehow with an edge to them.

“I, I, I… meant nothing by it, please forget what I said.” Bikram said, his whole being quavering in fear.

“Forget it? You mean I should disregard the kindly impression you just gave us?” responded the muscular miner as he took a deep gulp of the foul excuse for liquor in low-town, his eyes never leaving Bikrams.

The broad-shouldered woman sitting next to him on the table slammed her metal tumbler down on the table hard, causing Bikram to shift nervously from one to the other. The woman eyed him with a smile on her face but something far more sinister in her gaze, as she reached for the jug of ale that her mining compatriot shoved across the table. Bikram could feel the tension in the air around him. Whether they stared or sneaked peeks, every eye was on him in this filthy tavern. What had he been thinking?!

“I’m sorry!” he finally blurted out, trying to look all around the room as he apologised and somehow still looking at the pair before him who were clearly the ones calling the shots in this moment.

“Don’t be sorry little Prince-ling!” said the woman, “You aren’t yet but if you’re not careful, you most certainly will be – there are no guards, no soldiers, no one to even hear you scream. What were you thinking coming down here all by yourself?”

“I… I don’t know… I mean, I do know…” he stammered and then paused to close his eyes for a moment and try and take a deep breath and slow his pounding heart.

“Well do ya, or don’t ya?” asked the man, “I swear, you’d almost think royalty didn’t know how to use it’s own bloody head at a moment like this!”

This brought out some genuine laughs from the crowd, an ever so slight easing of tension.

Finally Bikram gulped and said, “I wanted to see the kingdom, MY kingdom. All my life I’ve been groomed and raised to one day rule, well, everything. But I’ve only ever seen a handful of main streets in every town, or palaces or the homes of officials.”

“So you thought you’d come down to the hell that is your beloved king-fathers gold mine, where he sends all the people he doesn’t know what to do with and sometimes just… people who were around when they needed more labour? Is that about right?” asked the woman.

“I suppose, yes, yes it is…” he answered, “But I’ve been trying to see other things as well, the cities, villages, farms…”

“Well isn’t that just lovely!” said the man, an annoyed look on his face.

“You’re not sorry enough little royal! What, you think this is a game? Or some childrens story? You want to travel around in disguise? Well at least learn to blend in and not insult the people you’re trying to learn about – didn’t anyone in that gilded slaughterhouse you come from teach you any manners?!” The man was clearly getting a little annoyed and the people around him seemed to pick up on it.

This was not good. At all.

“I don’t really give a bucket of bullock crap…”, and in turn the man was cut off as well.

“Oh shut your drunken face Lakhna!” said the woman. Her stern expression seemed to irritate her friend but clearly he wasn’t going to argue with her.

“Why don’t you continue to be kind little Prince, we’ve all worked hard at our jobs pulling wealth we will never share in from Mother Earth with our bare hands – why don’t you share some of that wealth here with all of us, as another… kindness.” It was not a question.

“Of course! I’m more than happy to!” Bikram said, a sense of relief in his heart as he fumbled inside his travelling robes for his money pouch which he tossed at the inn-keeper, “Please sir, as much food and drink for all my new friends here that will buy – any that’s left is all yours for being such a good host.”

A huge cheer and whoop of triumph went up from the room, at a volume that startled Bikram who was momentarily certain would blow the thatched roof off. He looked around and saw that all the attention his way had started to shift back to, whatever it was that it would ordinarily have been on and he could feel the knot in his gut loosen just a little. Only briefly though.

“Nicely done rich boy. But we’re not done yet and you’re not going anywhere.” said Lakhna, having knocked back another mug-full and starting to get more intoxicated.

A chair scraped the floor and the tall woman got up and said, “Yes you are and yes he is – you can have your fun somewhere else tonight.”

With that she strode the two steps around the table to Bikram, grabbed him by the arm and all but dragged him toward the stairs that lead to the upper floor. He stumbled and managed to find his footing but was utterly confused about what he should be feeling right now.

“Wait, where are we going? I mean, thank you. But where…”

“Listen Prince-ling, you don’t have a lot of options right now. You’re not getting out of this mining town alive tonight, hell you’d be lucky to leave this place in one piece right now. Your fathers a miserable old man who has no shortage of people that would gladly carve you into chunks and leave out in the jungle just to get under his skin.”

A shudder went through him at the idea and hearing his fathers vile reputation confirmed yet again also gave rise to anger that over-powered everything else. No one would dare mention anything like that to the young prince, but as he had grown over the years, it was hard to not hear the occassional hushed whisper. He knew his father was not a good man, but it had only been recently when he had learned the truth.

“Look!” said the woman as she led him up the stairs, “Way I see it, you don’t have options, I just possibly saved your life and you definitely owe me something. Seeing as how you gave all your money away just now… well I’ve never had royalty before and you don’t look half bad for a pampered brat, plus you even feel like you have some muscle under all that.” She squeezed his upper arm, by which she had been leading him.

Realisation suddenly dawned on Bikram, just as she shoved open a door. Immediately his mind swirled and he looked at her more closely than he had even thought to till now, she was not unattractive, though underneath the dirt, oils and layers of ragged clothing it was hard to tell. She definitely intrigued him but before he could process anymore thought, she stepped through the door and swung him so he wobbled past her, spun and crashed onto the bed. He had just about managed to clamber to a half-seated position before she was on him, straddling him and towering over him.

“I’m not…” he said, before a short shake of his head and then more confidently, feeling a bit more of his usual swagger, “I’m not afraid of you, you know.”

“You should be…” she whispered as she leaned close to him and seemed to almost be sniffing him.

He found himself drawn to her, something more animal, more visceral than he had ever been brought up to deal with.

“Tell you what Prince-ling,” she said, “You make the rest of my evening interesting and you can stay with me for now and try and sneak out bright and early while all the rest are sleeping off the huge drunk that you just paid for downstairs – if you bore me, I’ll toss you back to them.” A wicked grin was on her face, almost predatory.

He could feel his pulse pound, though not from fear anymore, at least, not only fear anyhow. He looked her dead in the eyes and could feel his own mouth form an involuntary smile, “I’ll take that challenge.”

(Note: You can read more of my stories here and more from the inMon prompt that I used for this little bit of randomness HERE)