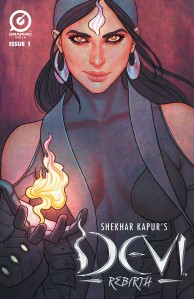 This issue marks a revival of a relatively in-limbo character of Devi by Graphic India. Originally published by someone else and with several starts and stops, this comic seems to be trying to be both a fresh start as well as a continuation of the previous incarnations. That’s not an easy thing to do as any longtime comic reader knows, but it can yield great results as well. So with that in mind and my usual curiosity, I decided to check it out.

The first thing that sprang out at me was the artwork. Mukesh Singh was always a talented artist but his work here is really fantastic, he proved himself one of the artists to watch after he started doing cover art for Marvel and continues to show his skill. Complemented by some pretty cool colours from Nanjan, the overall comic looks very good from start to finish – there are flourishes and flavours and a clear and distinct visual difference between the past-chapter and the present-day chapter of the comic. In addition, I was quite pleased to see the cover by the talented Jenny Frison whose covers for Angel several years ago blew me away and has been an artist of note in her own right – she keeps it simple and clean but notable and that is exactly what a cover needs to be for an issue that is meant to draw you in.

That said, I’m not entirely crazy about some of the design work. One HUGE annoyance for me is the need to make Bala look like Man-Bat. Why? What did bats do that they were the go to for a devil-figure? Did you have to give him devil-like bat wings and look so utterly cliché? Secondly, the current day full-body costume on Devi looks good, it’s a nice balance between sexy action heroine but not slutty or intentionally provocative or anything else that feeds the cliches of women in superhero comics – however the clearly Witchblade-inspired look they gave her incarnation in the past considering that she is surrounded by robed monks who are supposedly her people while she looks like she’s wearing thin bolts of lightening… well it looks good but there was no need for her to be pretty much butt-naked, they could have done the same VFX looking costume but had it be more than a measly teeny-weeny bikini.

Now on to the story. I’m definitely undecided on what to say about this story. The positive is that Kotian does a decent job weaving this first issue so that it caters to both the returning reader familiar with the previous stories as well as to new readers who have no idea what’s going on. I will admit that the jump to present-day and this random new modern Devi after all the ancient action might be a bit jarring to some, but if you wait a page or two, it fills in enough that you can keep reading.

The historical setup was handled well, though I have to admit, the first few pages I had moments where I winced at the dialogues which could have come across so much better with a little more thought. This is a problem that they seem to struggle with through the book and the blame for that lies on both writing and editorial for not being able to let the characters sound more natural and less like dialogue designed to serve a purpose. The second half was much tighter overall, though I didn’t care much for the slightly pretentious narration, but it felt like it should have been the first half of this issue that was cut in two so that they could muscle in an origin-ish story to the issue.

Overall I was impressed with the quality, especially of the artwork. It really is worth a look almost for just that.

The story, just like prior attempts at a Devi comic, has a world of potential to be a great superhero work. It could even be a great springboard to build a superhero pantheon around, but it won’t be easy and I hope they are able to maintain at least as good a narrative quality, if not improve it just a little. I did not enjoy the previous Devi comics all that much beyond the good concept and this Rebirth thus far seems to have been handled better.