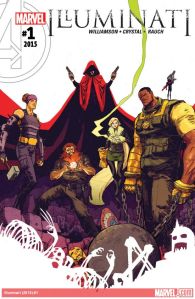 There have been other Marvel series bearing this name, This is the recent one where supervillainThe Hood tries to recruit Titania and a bunch of villains to form his own evil Illuminati

First and foremost, the series as a whole was reasonably well-drawn and even the writing, particularly ex-villain Titania’s journey from start to finish, weren’t bad. Her relationship with the imprisoned “Crusher” Creel (The Absorbing Man), her situation as a former villain trying to develop a normal life and struggling painfully at it – these were all interesting elements that I enjoyed right from the beginning.

But unfortunately it was not meant to be because this was pretty much glossed over once the story started and Hood showed up and then her story became a secondary story that only popped up when the story needed an emotional beat and for me was right till the end the only real highlight story-wise.

The overall concept was, and I quote: “How do the villains of the Marvel Universe live in a world where the sky is constantly filled with heroes? What do they do when they want out of that life? There is no escape. No future. Who saves the villains? The Hood believes he might be that savior. He wants everyone to have a place at the table. Now all he needs to do is build his army… Featuring Titania, Mad Thinker, Thunderball, Black Ant and Enchantress”

Except that apart from Hood and Titania, the others get very little room to do much besides Black Ant being obviously psychotic and Thinker being an asshole. This could have been a really interesting villain book, folks not necessarily evil but caught in the wake of some poor choices and trying to first get away from it and being drawn back into the madness of super-life as villains they don’t want to be but have to be simply to survive. THAT would have been a fantastic story. But that’s not even remotely the story we get for any of the non-Titania characters, they’re all pretty much just straight out crooks/bad guys looking to get paid.

What really failed for me in this book was however the idiotic basic setup of people actually listening to a dumbass loser like Hood after all the crap that he’s pulled, lack of even “honor among thieves” trustworthiness he’s shown and just downright being utterly terrible beyond measure at being both a supervillain and a leader… it boggles my mind that he’s still a thing and not either relegated to limbo or mutated into an at least measurable evil-monster/creature-ish threat instead of the putz he still is – one of the worst things to come from Bendis’s writing period.

Personally I think Marvel should just either turn the character into a joke punching bag and slowly fade him out or just outright shelve him for the foreseeable future because pretty much anything starring Hood post his solo mini waaaay back when he first started and had a somewhat curious and different origin story and was interesting as just a lucky low-level thug/hood who aimed too high and paid for it eventually because he just wasn’t that good… well that was interesting and the character should have just been quietly sent to limbo/prison then and left for as long as possible, but they keep bringing him back and he just gets less fun and more pathetic each time.

The only positive here was I actually kind of liked Titania’s story but as I said before, sadly that was a sub-story in this big cluster-frak and judging by recent Marvel titles I’ve been reading/hearing about, doesn’t seem like they picked up anything after it with her and Creel as a couple.

Maybe they’ll do it when there’s less big-ticket stuff happening.

STORY SCORE: 1 / 10 [mostly for Titania and decent art but otherwise not a comic I would recommend to anyone. Ever.]