Welcome back fellow comic fans, to another round of DC:Rebirth Reviewed – all read and reviewed by yours truly. It’s been a mixed bag of good and bad (as can be reasonably expected in any such large venture) – I’ve tried my bet to approach it with an open and impartial mind.

Whether you agree with me or not, feel free to express your opinion if you feel like it and bear in mind that all these reviews I’m doing are just that: opinions. It’s just one fans point of view. NOW! Roll with the new! (Heh… Chris Rock reference…)

So simple recap: Earth now has two more GL’s, the launched-with-fanfare-then-sidelined Simon Baz who at the start almost felt like an interesting progressive step for DC to be taking (for too short a time) and the recently activated Jessica Cruz. For some reason they’re both GL’s for Earth now and for its Sector in space. Why? Because big bad evil is coming and in case you missed it in all the comic chatter, it’s teased at the end of this issue and has to do with the Red Lanterns.

Also, now there’s yet another lost/forgotten Guardian who is connected to some kind of even superer super powered glowing-Tarantino-briefcase. And you know that it’s going to be at the centre of all this.

Not a bad issue, specifically in terms of the bits with the two Lanterns themselves. I’m still not a fan of the weird glowy-eye thing that Cruz has though – makes her face look wierdly unbalanced to me a lot. The problem? The big picture. They’ve screwed up the GL franchise so much at this point that I think they don’t know what to do and have some sense that if it’s not a universe shattering thing, what’s the point. I mean ever since the New52 was launched, the sheer number of multi-title crossovers we’ve had built around the GL family of books boggles my mind. Why can’t you just tell simpler stories? They usually work pretty well – this constant crossovering to me is just gimmickery to pump up sales of a mix of books.

The biggest cool-moment of the book? The almost Gods-like JL shot, it was Van Sciver all over and really worked so well on multiple levels considering what it was portraying. As always, I do like the mans work and the artwork is hands down a highlight for the issue – the Cruz-eye-glow even bothered me less in the interior art than in all the promo art so far like this issues cover.

There’s potential here, sure, but the fact that this is meant to be (yet another) reader friendly jumping on point, it already feels too heavy and filled with foreboding and stuff to come. I know you’re supposed to get people intrigued when you have a new #1, but this one leaves me about as disinclined to read more as the Batman book does – almost, here at least I like the characters a little so curiosity might let me read another issue or two for now. 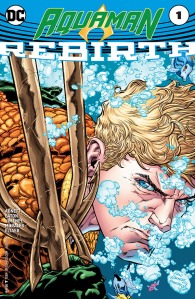 First off, I want to start by saying that Aquaman as a character has always been uneven for me in his comic incarnations. I’ve never really been a hater of the man, laughed at him and all – I mean sure the fish-bro jokes and Robot Chicken sketches can be funny but I’ve never looked down on the character and in fact always felt he was underappreciated and utilised in many respects.

Which is why I’m saddened by this new book.

The art is impeccable – I saw the large art team and thought it might muddle it and be overkill but there’s quality and consistency from start to finish and everything looks damned good! The action scenes in particular look fantastic. I thought the random bubble-ish streaks around him in the first pages as he swam were odd because you don’t see that when a fish is swimming under the surface, but fine, that’s a minor thing and it’s for effect so I’ll drop the nitpick.

The problem however is the story. Again, we’ve got poor Aquaman, still hated by the Atlanteans, still laughed at and joked about and yet somehow simultaneously feared and liked (as a Jler) by surface folk, still fighting this one-man kind of war and all… I don’t know, I just felt like there was a world of potential here that they just didn’t even remotely touch upon. Considering that the pre-Rebirth events including war with Atlantis and the JL being a prominent global presence with Aquaman being held side-by-side with Supes and Wonder Woman – both things literally mentioned in this issue – the setup just didn’t make sense to me. He either is a hero to the majority, or he isn’t. Why would people still not take him seriously? Why are the Atlanteans STILL hating on him instead of the majority being now supportive of their King, even if it may be a tad grudgingly. The mans more than earned a lot.

Plus: this would have been a fantastic place to introduce an Aquaman who has the full support of Atlantis, setting up a supporting cast of undersea soldiers/special-forces/heroes to help him balance being King and keeping an eye on the ocean in ways he can’t. Maybe a sort of underwater GL corp-ish thing.

I loved the art and the look of this series – it’s maybe the only reason I would read any more issues because I was thoroughly disappointed with the story. It was boring, derivative of so many Aquaman stories that I pretty much stopped caring a little more with every page. And by the end, with the reveal of Black Manta as a big-bag yet again, I just ceased to care. I would have rather seen an empowered, heroic Aquaman ruling the oceans with his kingdom behind him as they worked to hold back The Deluge who are trying to scuttle the Sea-Land peace that is being built and seeing Aquaman be a head-of-state as he deals/interacts with counterparts from the surface and they helped deal with or backed of and let him deal with the bad-guys or something like that.

One of the most disappoint of the relaunched books as far as story goes.

I’m going to be honest right up front – I didn’t like this issue much. Possibly less so because I read it after a very enjoyable Superman #1 issue.

It seems to kind of loosely (I suppose) follow on from there where the bearded Supes1.0 is still bearded and in hiding but after seeing live TV coverage of an armoured Lex Luthor wearing the S-shield and cape and being all heroic and proclaiming that he is going to carry on the legacy of the now-dead Nu52Supes… well suffice to say he… over-reacts just a teensy bit. Then there’s a glimpse of a hooded dude with a staff who I recognise from some pre-Rebirth images/articles as well as a mystery reveal of not one but TWO characters that shouldn’t exist.

The art was mostly passable, fairly competent work – but there was a strange scratchiness to it that didn’t appeal to me. It’s odd because the GA book had much more sketchy looking art but that worked well, here it just adds a messy, unclean feeling to things. I mean I know there is crosshatching and lots of line for shadow and such – but an example of what I mean is the excessive lines around Lex’s face when we get the first hero-shot of him. Just makes it looks sort of like he needs to wipe his mouth or that the artists weren’t sure when to stop adding lines.

But the story beats were the real downer here that for me dragged it all, well, down. After a positive, hopeful journey with Supes1.0 in his now titular book, here he’s almost grouchy. Sure, I know he has history with Luthor but (a) this has till now felt like an older, slightly wiser Supes with more maturity to his thinking, (b) he and Lois literally state that they checked out this worlds Luthor and found nothing and (c) this Lex is literally a hero on this world and a part of the Justice League. So it puts Supes’s reaction totally in a strange space as if they just decided they wanted this kind of confrontation so that it could justify the dialogue between them where to me Lex comes off as smug but on the right side of the debate – and forcibly leading up to the splash reveal at the end that was most aggravating for me, but I won’t spoil that here. Just suffice to say poor choice.

Like the Batman book, this one has been a disappointment. I expected a lot and more so after they seemed to be getting a good feel for Superman again – only to have him come across out of character here and petulant a bit for weak reasons at best. I suppose I’m also disappointed because Jurgens seemed to have such a good handle on him in the just ended mini-series starring Supes1.0 and family.

Plus the big reveal at the end was such a dumbass choice. And on top of that we have this already ongoing mystery evil/conspiracy/some bullcrap going. Why can’t we just have simple adventure? Why do we constantly need to have this mystery evil and big-bad and all? They were doing so well in Superman #1 to make things feel simpler and baggage free and genuinely new-reader friendly and then they pretty much crap all over that with this issue.

If you are a fan, I would say stick with Superman and drop this title which is pretty much my intention right now.